AHA! RECEIVES $35,000 FROM MASS OFFICE OF TRAVEL AND TOURISM

Here are the best things to do in Massachusetts. – READ MORE

The Best Cities For Young Artists: If You Live Here, You Don’t Have To Starve

New Bedford (& AHA!) made this list along with some other really cool cities! The Best Cities For Young Artists – READ MORE

The 10 Most Artisitc Towns In America – New Bedford Made the list!

The towns on this list have stood out on the American landscape for decades, and continue to reinvent their artistic communities each year. These are places where old army bases are converted into galleries, abandoned strips malls into studios, and boarded-up homes into art residencies. In each place, inspiration is easily available, and a laid-back lifestyle gives you time to act on it. – READ MORE

Trendy galleries, artist co-ops, live music venues, an urban winery and even a restaurant that turns into a disco. Would you believe that all of this big city action goes down in nearby New Bedford? Let’s face it: the city has had its share of problems over the years. While the historic Whaling City has gotten a bad rap, truth be told it’s a vibrant arts and entertainment hub that’s well worth a visit.

Where to Begin
There are plenty of great guides and colorful maps that you can pick up either at the waterfront Visitor Center on Fisherman’s Wharf (Old City Pier #3, 800-508-5353) or at many of the galleries located throughout the city. Buy Art Buy NB is a pamphlet that contains the addresses and hours of 13 galleries plus an easy-to-use walking map and information on parking. Downtown New Bedford Inc. is a free guidebook that includes not only gallery information but also listings of restaurants, museums, antique stores and more. Pick up either to navigate the streets with confidence.

Another method by which to get acquainted with the New Bedford arts scene is to attend an AHA! Night. This free arts and culture event takes place on the second Thursday of every monthfrom 5-9pm downtown. Over 60 mu- seums, galleries, artists, arts organiza- tions, merchants, restaurants, churches and schools band together to present creative programming to the community. Each month brings a different theme. Come out to enjoy art exhibits, live music, theatre skits and lectures. It’s the perfect way to dip your toe into the pool. READ MORE

March is Fiber Month in New Bedford, and no, it has nothing to do with eating more whole grains.

From yarn-bombings to children’s books illustrated with embroidery to fashion shows, downtown New Bedford’s art community is celebrating fiber-based art. Fiber Month ties in — no pun intended — with the March 13 AHA! Night, when the theme is “All Sewn Up.” And it’s especially fitting in a city that once was a textile powerhouse.

“I love fiber arts. I think it’s one medium that most people can identify with at some level,” said Noelle Foye, director of the New Bedford Art Museum/ArtWorks!

“People understand knitting, crochet, quilting, weaving and the other techniques for working in fiber. Plus it’s tactile — people love to feel and touch fibers,” Foye said. New Bedford has so many artists working in so many different fiber mediums — felting, dyeing, quilting, weaving, paper-making and book-making, knitting — the list is almost endless.” READ MORE

The Spirit of Poe Amongst Cobblestone Streets
by Anna Gallo

On February 13, Artworks! and the New Bedford Art Museum, together with the program The Big Read, presented Edgar Allen Poe at AHA! Night in New Bedford. The event celebrated the city’s partnership with The Big Read- a National Endowment for the Arts that strives to “encourage reading by all ages,” said Mayor Mitchel.
Mayor Mitchel kicked off the night at City Hall, where locals gathered dressed in Poe-inspired costumes. Throughout the city, local businesses hosted free, public events, from reenactments of Poe’s classic works by the New Bedford Public High School at the New Bedford Whaling Museum- to an artist trading card event at Gallery X.

One of the main contributors to AHA! Night was the recently merged New Bedford Art Museum/ Artworks, which hosted two gallery exhibitions. “The Muse Is Poe,” featured in the main gallery, was a national juried exhibition, which featured paintings, sculpture, photography, and mixed media. The second show, “Dreamland”, featured works of art by local teenagers that were inspired by Poe’s classic poems. “Our hope is to be a stronger voice for the arts in our community and to have an even greater impact through our merging and our collaborations with other organizations in our community,” said executive director of New Bedford Art Museum/Artworks! Noelle Foye.

A few blocks down from the gallery, five students from the New Bedford Public High School presented their own adaptation of Poe’s most haunting works, with a performance at the Whaling Museum’s theater room. The skit revealed a tale that followed the ghost of a murdered woman, seeking revenge on her husband. Other acts of the night included Conrad Pomerleau’s performance of “The Tell Tale Heart” at Bristol Community College, with an after-show discussion led by Margot Green, an American Literature Professor at BCC.

For nearly 15 years, AHA! Night has hosted events open to the public to support cultural growth. “It is a community partnership that builds a platform each month for people to celebrate, share, and connect with the community,” says Candace Lee Heald, program director of AHA!. The city’s partnership with The Big Read will be an ongoing effort throughout this month to revive literature in society. “Once you get ‘em hooked, they’ll read for a lifetime,” said Mayor Mitchel. 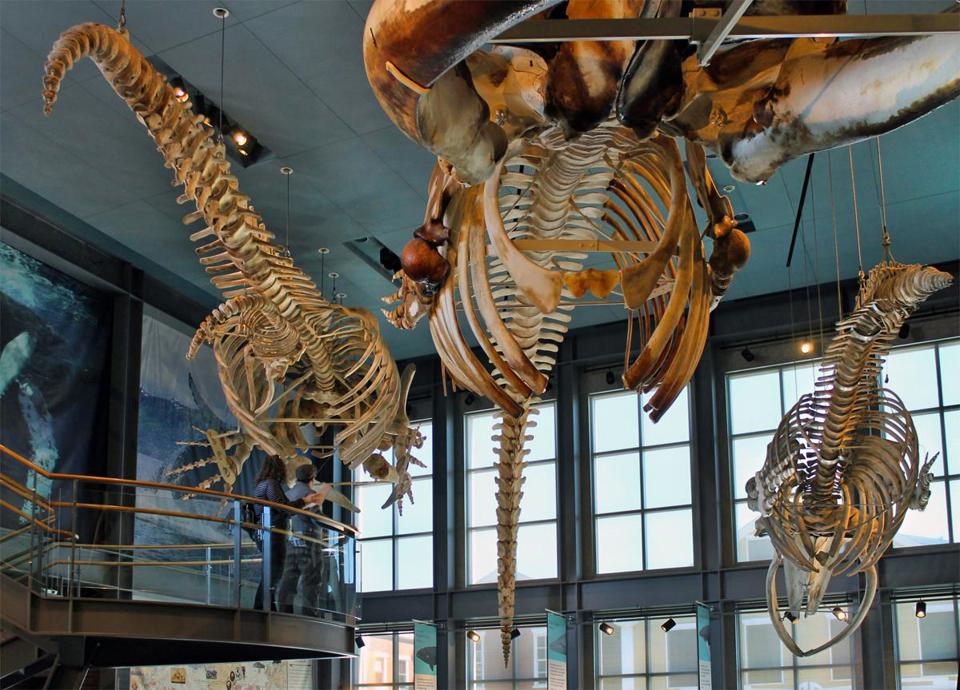 Required to read “Moby-Dick’’ over a school holiday break, a memory that still haunts us, we weren’t keen to visit New Bedford. Herman Melville, of course, shipped out from here in 1841, and his experience inspired the classic. Seafaring life is still a major part of New Bedford’s identity, but this Southeastern Massachusetts city, with the strong influence of its Portuguese and Cape Verdean communities, has other tales to tell. It was an important stop on the Underground Railroad and home to abolitionist Frederick Douglass for five years. Artists such as Albert Bierstadt and William Bradford helped forge its commitment to the visual arts. New Bedford has a texture and vibrancy that might surprise. Young families are especially smitten, thanks to attractions like the Ocean Explorium and Buttonwood Zoo. READ MORE

There was a Wishing Well on Union Street in New Bedford during the October AHA! Night. Several hundred citizens paused and many contributed wishes, hopes and dreams.

The Wishing Well is a simple idea: Set out a collection point on AHA! Night and invite citizens to name things that they would like to see in the city’s future.

If it wasn’t for Mother Nature’s mean and nasty side, most AHA! events would probably take place outdoors all year long, but eventually it will be rainy and/or cold here in New England, and things either shut down for a while or move inside.

The Centre Street Sessions, which are held outdoors on a downtown loading dock from June through September, is one of those season-specific events. This Thursday’s performance by Boston saxophonist Benny Sharoni and friends will be the last outdoor installment to be held on the historic downtown cobblestones of Centre Street until spring rolls back around.

Neal Weiss of Whaling City Sounds (a record label based out of New Bedford) said that the Sessions, which take place at the old Kaller Beef Building, started a number of years ago after he was approached by AHA!’s directors. Weiss still owns the building and runs his businesses (he also runs a high-tech business) out of it, and as a purveyor and fan of music in general, the merger with AHA! was a perfect fit.

Weiss said that Grace Potter of Grace Potter and the Nocturnals, who is from Waitsfield, Vermont and who has more recently risen to national prominence (they opened for the Allman Brothers at the Comcast Center in Mansfield last week), performed at the first Centre Street Session(s), and from there, it’s continued on with a combination of mostly jazz performers, though they’re open to other forms of music. READ MORE