Staff, Steering Committee Members and other friends of AHA! (Art History Architecture) Night gathered on Thursday, June 14th at the New Bedford Art Museum for the 14th Annual Meeting of AHA!, a long-standing, successful project of the Community Foundation of Southeastern Massachusetts.

The purpose of the meeting was to welcome new members, announce newly-elected officers, and discuss past successes as well as plans for the future. Mayor Jon Mitchell and State Representative Tony Cabral spoke briefly to confirm their support of the AHA! project.

The following were newly-elected as volunteer members of the Steering Committee; their posts reflect an important commitment to the region’s arts, culture and economic growth:

In addition to welcoming new members during the Annual Meeting, new officers were announced. Tracy Furtado and Stacie Charbonneau Hess will Co-Chair AHA! for a one-year term. Dana Rebeiro will serve as Secretary and Nelson Hockert-Lotz as Treasurer.

History of AHA!:
AHA! night began in 1999 as the collaborative vision of cultural institutions in the downtown area who wished to highlight the artistic activity in the region. Along with space and support from the University of Massachusetts, Dartmouth Center for Performing and Visual Arts, the first AHA! Night took place in July of 1999 with just 14 partners and an audience of 200.

AHA! is a built-in audience for new galleries, area musicians, youth performance groups, and just about every cultural activity to be found in and around New Bedford. The purpose of AHA! has always been to make arts and culture accessible to all, regardless of income. Honoring this mission, AHA! has always strived to remain free of charge, and encourage partnering institutions to remain. In this time of fiscal uncertainty, AHA! welcomes new sponsors such as: Joseph Abboud, HallKeen Management, BayCoast Bank, and many other businesses who have shown a proven commitment to the continuation of arts and culture in the region.

The existing Steering Committee, which includes Lee Blake and Lasse Antonsen of UMASS Dartmouth, Hank Mastey of the Local Cultural Council and Jill MacLean of the City of New Bedford, continues to seek out new opportunities to expand cultural awareness and opportunity for artists to perform in the Greater New Bedford region.

AHA! is also planning a fundraiser on August 11th, which will include a three hour sunset tour on the Cuttyhunk Ferry Company vessel, with a cruise around Padanaram Harbor. Ample hors d’oeuvres are included in the ticket price, with a cash bar. Limited tickets are available at for $25 each; to purchase, please call Lee Heald in the Community Foundation office at (508) 996-8253, extension 205.

The Community Foundation and its AHA! program have been meeting with a group of engaged citizens in Fall River who want to use the AHA! model of community collaboration with arts and cultural programming to enliven the downtown area of Fall River.

Arts and culture programming is one in a portfolio of strategies that builds a sense of vibrancy and diversity in communities, and can attract tourists and other visitors to your community. It helps in the process of building and revitalizing communities; and creates a network of positive thinkers who want to commit resources and energy to building the creative economy.

After several meetings with community leaders, the plan emerging in Fall River is to host signature events throughout the seasons clustered in different geographic locations, rather than a monthly program in a central downtown footprint, which has been the character of the New Bedford AHA! program since it started in July 1999.

Created and funded by the City of New Bedford, the Island Foundation, the Mass. Cultural Council and local business, sponsorships and donors, AHA! – or Art, History, Architecture –  takes place on the second Thursday of each month, promoting the work of local artisans with open studios, gallery shows, musical and dramatic performances and has been a signature project of the CFSEMA, which also serves Greater Fall River.

“AHA! has been a very successful asset to New Bedford’s creative economy,” said CFSEMA President Craig J. Dutra. “The Community Foundation is a regional resource, and we are excited about helping Fall River develop an arts program of its own working with us and the AHA! model.”

“We are looking to build on the success of AHA! New Bedford in providing the framework to jump start an arts program here in Fall River,” said Fall River City Councilor David Dennis, whose wife, Sandy, heads Arts United, a Fall River nonprofit that uses volunteers to promote and support Fall River artists. “It is important to take a regional approach with these projects because it fosters greater collaboration and creates important partnerships between communities.”

“The AHA! arts and culture partnership is happy to collaborate, and share our experiences and expertise,” said AHA! Director Lee Heald. “AHA! has added vitality to downtown New Bedford, and Fall River is another Gateway City that we believe has the same potential.”

AHA! has proven to be a successful approach and thus a successful brand for urban revitalization, and has been used as a template for other work by the Massachusetts Cultural Council’s Adams program elsewhere in the Commonwealth.

New Bedford police show another side of the badge 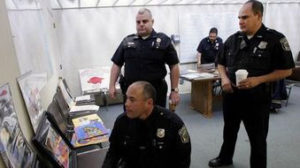 NEW BEDFORD — Some city police officers are quick on the draw and it has nothing to do with the weapons they carry.

They are bona fide artists whose work will be showcased as part of next week’s AHA! Night, when paintings, drawings or poems by four city police officers will be displayed at the downtown station.

The officers, Lt. Scott Carola and Officers Luis Sud-Martinez, Elvin Ramos and Charles Perry Jr., are also planning to attend Thursday’s event to meet the public and answer questions about their work.

All four said they are self-taught and began drawing, painting or writing in their youth. Some said they refined their skills through the years by watching videos and tutorials on the Web.

Now, they said, they write, draw and paint because they enjoy it and to relieve the stress of being a police officer.

They have also all had success as authors or illustrators of self-published books.

The exhibit is the idea of Capt. Joseph Cordeiro, the station commander, who wants to show the public that police are also people. READ MORE

Mitchell spoke at ribbon-cutting ceremonies for the new clothing store 767 Exchange and Braza Rotisserie restaurant, holding them up as examples of the expanding retail choices downtown.

One of the downtown’s best features is the diversity of stores, offering people a range of unique businesses, he said. 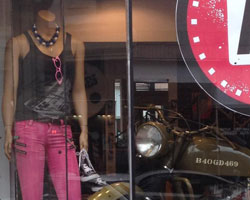 “There is a lot of stuff going on, and every shop you walk by, there is something new to see,” Mitchell said outside 767 Exchange, which opened this week in the former storefront of Elaine’s T-Shirts on Purchase Street.

Representatives of the New Bedford Area Chamber of Commerce and Downtown New Bedford Inc. also attended the two business openings, which were held back to back during the city’s monthly AHA! night. READ MORE

Home
Next AHA!
About AHA!
AHA! In The News
Partner Directory 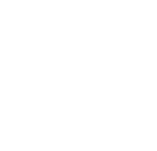 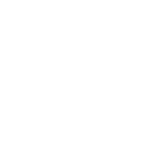